Posted on April 20, 2014 by Preservation Erie in News and Events | Comments Off on Erie Places, Erie Stories exhibit available online 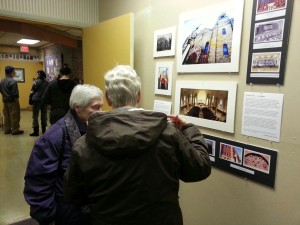 Erie Places, Erie Stories was a collaboration of the Mercyhurst University Public History program, the Erie Nonprofit Partnership, Preservation Erie, Center City Arts/Bloom Collaborative, and other partners throughout the city. The project engaged Mercyhurst students throughout fall 2013 in both producing photographs of a few of Erie’s great buildings and landscapes, and conducting oral history interviews with individuals who have some connection to those places. Students in Dr. Chris Magoc’s Introduction to Public History class interviewed residents, church parishioners, and business owners with deep and lasting attachments to some of the special places in the greater Erie area.

If you missed seeing the Erie Places, Erie Stories exhibit at Bloom Collaborative in December, or Erie City Hall in January/February, you can experience it online at http://www.mercyhurst.edu/academics/undergraduate/history/erie%20places

Posted on April 13, 2014 by Preservation Erie in News and Events | Comments Off on Villa Chapel supporters hold (another) Easter event

At 1pm on Easter Sunday, April 20, 2014, members of the Save the Villa Chapel committee of Preservation Erie will convene for the ninth year in a row at the corner of West 9th and Liberty to provide an update on the status of the landmark chapel. Following the announcement, a brief Easter Parade will be held to celebrate the chapel’s survival through another difficult winter.

On Easter Sunday 2005 a group of concerned citizens gathered to protest the rumored demolition of the Villa Chapel.  The resulting Save the Villa Chapel committee has held dozens of fundraisers, raised thousands of dollars, and worked to find an appropriate reuse of the building.

In 2009, Duncan Stroik, a University of Notre Dame professor of architecture and founding editor of Sacred Architecture magazine toured the Villa Chapel and admired the carved woodwork and stained glass saying that the historic building is “a gem that should be saved.” The chapel is on the National Register along with the rest of the Villa Maria complex. The convent and school have been converted to apartments, but the chapel remains vacant, unheated and leaking.

In 2010, in response to concerns that the chapel was “too far gone to renovate” an engineering expert from Pittsburgh’s Atlantic Engineering was hired to evaluate the building – he indicated that the chapel is stable, but in need of roof and “cosmetic repairs.”  In 2011, a reuse planning session (with stakeholders and architects Dave Brennan, Jeff Kidder, Richard Olaya and Ellis Schmidlapp) resulted in a 2012 re-use report drafted by KidderWachter Architecture and Design. The illustrated report details will be available at the Easter Sunday event.

Due to the chapel’s uncertain future, Preservation PA placed the Villa Chapel on its list of Pennsylvania at Risk properties in 2011.  Dr. Chris Magoc, while serving as Preservation Erie’s Board President, commented that a renovated chapel would “help stimulate community and economic development in a historic Erie neighborhood…”

While jobs and tax revenues are crucial for a thriving community, Magoc and many others believe that saving the chapel is crucial to preserving our history, identity and sense of place. Mary Frabrizio McCarthy wrote in an Erie Times News opinion piece that Villa Maria grade school, high school and college students met in the chapel “to learn and sing the songs of our faith, songs that have stayed with us throughout our lives.”  Another Villa alumna, community leader Sally Carlow Kohler, commented that she has “been fortunate enough to have traveled around the world” but that she returned home to realize that Erie’s Villa Chapel “is one of the most beautiful anywhere!”

Preservation Erie and the Save the Villa Chapel committee believe that Greater Erie must both recognize the importance of becoming a wise steward of its many inherited treasures.

Posted on April 10, 2014 by Preservation Erie in News and Events | Comments Off on Civitas celebrates 10 years in Gem City on April 12

On Saturday, April 12 from 3-­‐5pm at Frontier Park’s LEAF building, Civitas is hosting a free event to showcase the community organizations they have co-­‐founded as well as the vital projects of these various groups. A display table format will allow the public to talk directly with organizers:

ALL ABOARD ERIE.  Julie Minich and Brian Pitzer will discuss efforts to improve rail and bus service, and will unveil the conceptual model for a Pennsylvania Higher Education Road Network (PHERN).  PHERN proposes to link colleges and universities through direct, frequent bus routes to foster collaboration between higher education faculty and their 20,000 students.

INNOVATION ERIE David Willoughby, Jonathan D’Silva and Eric Dahl will encourage attendees to consider submitting “good ideas” for new products to the Innovation Erie entrepreneurial contest by the May 14th deadline.  The grand prize is $2,000 in cash and thousands more in professional services including legal advice, marketing help, manufacturing guidance and rapid prototyping.

MADE IN ERIE MARKETPLACE Last year’s inaugural Green Friday Made in Erie Marketplace generated $5,000 in income for Greater Erie entrepreneurs selling locally produced music, food and crafts.  Organizer Stephanie Westley will be present on April 12th to discuss the next MADE IN ERIE marketplace event planned for the Masonic Temple’s Camelot Room on Nov. 28, 2014.

PRESERVATION ERIE Melinda Meyer, Eric Dahlstrand, Gail Corwin, Julia Nene, Cameron Robertson will discuss the on-­‐going inventory of historic properties and sell membership tickets to the Greater Erie Awards night to be held May 1 at the Masonic Temple Ballroom in honor of the YMCA, Kraus Dept. Store and the Remnant Shop.  The May 1 keynote presentation will be made by Ed McMahon of the Urban Land Institute in Washington, D.C.

RETHINK THE MCBRIDE VIADUCT Adam J. Trott and Michael Beightol will outline the rationale for using the proposed 1.2 million demolition funds to repurpose the East Avenue viaduct.  No longer viable to support dozens of 22-­‐ton trucks crossing over the CSX and Norfolk-­‐Southern rail lines, the McBride Viaduct is still open to pedestrians and bicyclists.  With work, the Viaduct can become an attractive path and park telling the story of the neighborhood and fostering East Side investment and redevelopment.

SAVE THE VILLA CHAPEL Barbara Crone, Audra Alexandra, Sue Moyer and Sheila Murray will outline the nine years of efforts to save the landmark chapel at 9th and Plum including fundraising, creating a website, fixing the roof and funding reuse plans.  Flyers about the April 20th Easter event will be available.

Posted on April 1, 2014 by Preservation Erie in News and Events | Comments Off on 2014 Greater Erie Awards

Admission to the May 1 Greater Erie Awards is $50 which includes a yearly membership with Preservation Erie as well as invitations to several behind-the-scenes tours of rehabilitated or repurposed historic properties and presentations by local craftsmen who specialize in historic preservation trades (i.e. metal working, carpentry, painting). Greater Erie Awards Facebook Event page

Mr. McMahon holds the Charles E. Fraser Chair on Sustainable Development at the Urban Land Institute in Washington, D.C. where he is nationally known as an inspiring and thought provoking speaker and leading authority on topics related to sustainable development, land conservation, smart growth, and historic preservation. Before joining the Urban Land Institute, Mr. McMahon spent 14 years as the Vice President and Director of Land Use Planning for The Conservation Fund in Arlington, Virginia where he helped to protect more than 5 million acres of land of historic or natural significance. He is also the co-founder and former President of Scenic America, a national non-profit organization devoted to protecting America’s scenic landscapes.

2014 Greater Erie Award recipients, The Remnant Shop, Kraus Department Store and the Downtown YMCA, were selected because of their ongoing commitment to their neighborhoods, historic properties and Greater Erie.

The Remnant Shop on East 11th Street is a resource for high-end fabrics unavailable elsewhere in the region. The Pentz family regularly drives to Highpoint, North Carolina to buy the remainder bolts of designer upholstery fabric, purchased by Erie trades people and artists.

Kraus Department Store has been an anchor on Parade Street offering a variety of products from lampshades to t-shirts as well as heavy equipment rental, window screen repair and wall-paper-hanging clinics. For 125 years, shoppers from Greater Erie have made purchases there.

The YMCA on West 10th nurtured downtown youth and adults for over a century. The Downtown Y recently started a $500,000 renovation project for their expanded Teen Center.

Because of Your Support:
Thanks to the success of the Greater Erie Awards last year, Preservation Erie was able to generate community support for a county-wide inventory of historic properties. Work on the inventory began in December. The inventory will enable Erie County communities, property owners, organizations, and agencies to better appreciate the cultural and economic value of their historic resources, and assist civic leaders in planning for their protection. Preservation Erie also recently joined forces with the Erie County Historical Society to create a Joint Action Team focused on public policy and advocacy.