History of Preservation in Erie

1812 – 1949
The most notable early preservation stories in Northwestern Pennsylvania are maritime tales, involving the U.S. Brig Niagara and the U.S.S. Wolverine.

The original U.S. Brig Niagara, built in the War of 1812, was reconstructed in 1913 by local shipbuilder William Paasch for the occasion of the centennial celebration of the Battle of Lake Erie.  The reconstructed ship then sat for more than two decades at the foot of State Street, until rescued as a Works Progress Administration project by President Franklin Delano Roosevelt.  This second reconstruction effort stalled in the postwar era, ultimately finishing in time for the 150th  anniversary of the Battle of Lake Erie in 1963.  After the celebration, however, the ship sat in a concrete cradle at the foot of State Street, a neglected old naval icon.  That changed in the mid-1980s, when the Flagship Niagara League worked earnestly with the Pennsylvania Historical and Museum Commission (PHMC) around a vision of making Niagara sail again.   After years of determined work, the Niagara League and the PHMC saw their dream come true, as a reborn (and entirely reconstructed by noted ship designer Melbourne Smith) Niagara was re-launched on September 10, 1988, the 175th anniversary of the Battle of Lake Erie.  Today the ship sails with a crew of 30-40 professional and trained volunteer crew, and with the financial  support of the PHMC and the Flagship Niagara League.

The USS Wolverine, the first iron-hulled ship built for the U.S. Navy, was built in Pittsburgh and launched as the USS Michigan in Erie in 1843.  Its mission was to put a check on British naval strength in the Great Lakes, but was instead employed to quell civil disturbances (including arresting timber pirates, guarding Civil War POW camp, containing anti-Mormon violence, and stopping uprising by Irish-American patriots called Fenians).  Stationed in Erie, the ship was a significant part of Erie social life; so many officers and crewmen of the Michigan married young Erie women that the city acquired the nickname “Mother in Law of the US Navy.”  After sixty-one years of active service (and after having been renamed USS Wolverine), the ship was decommissioned  in 1912.  For more than three decades, various entities shifted the responsibility for restoring or scrapping the vessel as its weathered hull lay deteriorating in Presque Isle Bay.  Although saved from the World War II scrap metal recycling crusade by President Franklin D. Roosevelt (an old navy man himself), the historic ship  tragically met the scrap heap in 1949.  The loss of the Wolverine continues to be one of the greatly mourned events of local history.

Mid to late 20th Century
With the availability of Federal funding in the 1960’s and 1970’s, Erie undertook an extensive urban renewal program in an effort to revitalize the downtown by tearing down much of its historic architecture.  A few voices were raised in opposition to the demolition, but many treasures were lost including old City Hall, the Lawrence Hotel, Shea’s Theater, and the Reed Mansion.   Dozens of other 19th and early 20th century buildings that had contributed to Erie’s rich urban fabric were lost during this time. Without protection, demolition continues to threaten the remaining structures.

Because Erie’s urban renewal did little to halt the flight to the suburbs, residents became less enamored of demolition plans.  In 1979, the Preservation Project of Erie was formed.  This nonprofit community organization promoted economic development through the restoration and contemporary adaptive reuse of historic landmarks and neighborhoods.  Very active in the early 1980’s, the Preservation Project assisted in saving several structures, presented educational programs, held annual dinners and published periodic newsletters and other documents.

The Preservation Project was involved with the restoration of the Hamot House at 3rd and French and the Wright House at 235 W. 6th.  The group was instrumental in conducting a feasibility study leading to the restoration of Modern Tool Square.  Other success stories include buildings along North Park Row (added to the National Register in 1980), the old firehouse on French (now Pufferbelly Restaurant), Chandlery Square on the northeast corner of 4th and State, and Jones School at 8th and Holland.  Preservation Project members were involved in the nomination of the West Sixth Street Historic District to the National Register

1990’s to 2001
Without a paid staff or funding, by the late 80’s, the Preservation Project became less active.  Because the Project had always worked closely with the Erie County Historical Society, an agreement was made to fold the project into the organizational structure of the Society as a “Historic Preservation Committee”.  The Society’s staff, membership and significant funding enabled the encouragement of preservation efforts in Greater Erie.

From the early 90’s until to 2001,  the Society’s Executive Director, Don Muller, was the public face of preservation in Greater Erie.  Regularly quoted in local news, Muller was active in local and state-wide preservation work.  Under his leadership, the Society’s Historic Preservation Committee fostered renovation and adaptive reuse by maintaining an Endangered Properties list and, beginning in 1996, by presenting annual Historic Preservation Awards.   The Society assisted in the nomination of districts to the National Register and advocated for historic zoning districts.  Success stories include Lovell Place, Palace Hardware building, the Spencer House on West 6th, Union Station and the Boston Store. 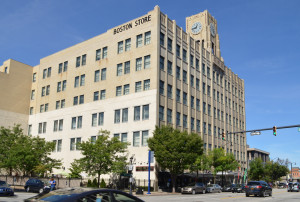 21st Century
Beginning in 2001, the Erie County Historical Society leadership turned from historic preservation efforts towards other concerns.  The Society’s “Historic Preservation Committee” continued to make annual awards, but did not advocate against demolitions.

Many regional leaders viewed historic structures as eyesores, and adaptive reuse as unrealistic or undesirable.  Real estate tax programs, some designed to encourage redevelopment had the unintended consequence of fostering demolitions. The LERTA program offered a decade of property tax exemption to those who made improvements or built new construction.   Property owners found that demolition of  under-used structures could reduce property taxes up to 90%.  Drive-through banks, drug stores and parking lots replaced historic structures.  Zoning ordinances did not encourage adaptive reuse.

In 2005, an artist collaborative, Civitas, led efforts to reinvigorate regional preservation efforts focusing a beloved chapel and prominent industrial site. After rumors of an impending demolition of the historic Sisters of Saint Joseph Villa Maria Chapel at West 9th and Plum Streets, Civitas initiated the founding of the Save the Villa Chapel Committee (now affiliated with the Erie Center for Design and Preservation.)

Civitas publicized a 1993 study that identified 1880 Erie Malleable Iron complex on Cherry and West 12th Streets as in good condition and important to the city’s sense of place.  An international company purchased EMI and had no use or interest in the still- active foundries.  In 2004, the region economic development leadership pushed for demolition of the 22 acre site to attract new industry, jobs and tax dollars.   Civitas, organized public relations events at the site and hosted a seminar on “The Role of Historic Industrial Architecture in Erie.”  Despite these efforts the EMI site was razed in 2006 and two years later the site was rezoned and purchased by the Diocese of Erie to create a football field and sports complex for parochial students.

Today, Preservation Erie, in partnership with the Erie County Historical Society, Pennylsvania Historical & Museum Commission, Preservation Pennsylvania, Erie County municipalities and like-minded/like-missioned organizations, works to preserve and protect the unique character of greater Erie by encouraging both a greater appreciation for and the adaptive reuse of the historic buildings, industrial structures, and historic neighborhoods that have shaped our collective regional identity and sense of place. With projects that include such landmarks as the Villa Chapel and Roosevelt Middle School, Preservation Erie promotes the value of historic preservation and good urban design as key elements of a vision of sustainable development that can improve the quality of life in the region.